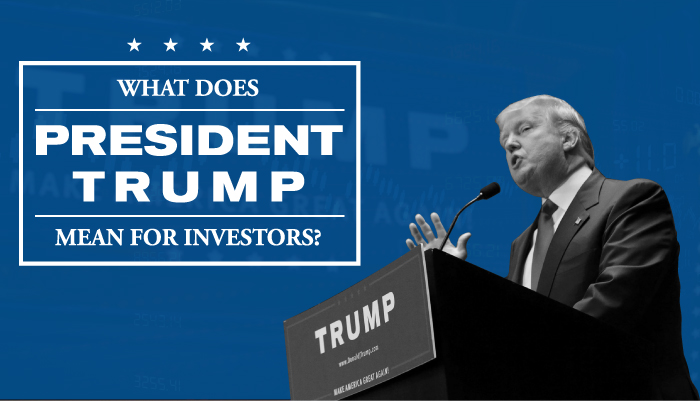 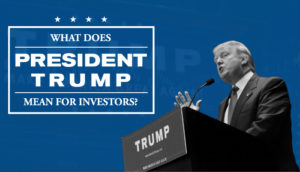 Now that the 2016 presidential election is over and we can refer to Donald Trump as President Trump, it’s time to examine some additional questions. More specifically, how will President Trump affect markets and other economic measurements? How will a Republican controlled Congress affect the economy? And what should an investor do?

Princeton economists Alan Binder and Mark Watson made a detailed study, “Presidents and the Economy: A Forensic Investigation,” analyzing the economy’s performance under presidents of the different parties. Measuring economic data from 1947 through 2ndquarter, 2013, they concluded the following:

Despite this data, Binder – a prominent liberal economist by the way – concluded that the differential between Democratic and Republican performance is due mostly to “good luck.”

Global markets around the world are reacting with shock. Japan’s Nikkei tanked by 5.4%, most European stock markets are in negative territory and the Mexican currency has plummeted. And gold – often considered a safe haven in turbulent times – was up over 2%. The reasons for these large market movements are twofold.

First, the stock market simply had priced in a Clinton victory. One only needs to look at Monday’s almost 400-point market surge after the FBI cleared Clinton in the email investigation.

Second, the markets do not like uncertainty and there are a lot of unknowns to a Trump Administration. Remember, the markets had almost 30 years of “Clinton data” and generally knew what Clinton’s policies would look like – the same is just not known with a Trump presidency.

The 2016 Presidential Election will forever be remembered as a historical repudiation of Washington’s political establishment. And it is precisely because of this that it’s important to examine the markets and investments of today vs. relying too much on historical trends or data.

Should you alter your investment portfolio because we now have a Republican president and likely a Republican-controlled Congress? No.

A president’s influence is large but still limited. Congress, world economies, foreign governments, military affairs, the Federal Reserve, and many other factors outside of a president’s control influence the stock market and the economy. And this time is
no different.

The Most Important Lesson We’ve Learned

When events like the 2016 Presidential Election “surprise” the markets, we ask ourselves what we’ve learned and how we can become better and more informed. And the answer to that question – for us – is obvious: the media was way off.

Up until Monday evening, we read poll after poll and article after article that predicted a Trump Presidency as nearly impossible. Even Fox News – a more right-leaning news outlet – seemed to have conceded to Clinton. How did almost every news outlet get
it wrong?

Well, we’re not sure there is a single answer, but we have at lease one idea. Specifically, we think that the decline in local media outlets has led to a consolidation of the “media” in New York and Washington DC. And the New York and DC media are incredibly out of touch with the rest of our country. This wasn’t a within-the-margin-of-error event like Brexit (when polls suggested that England would remain part of the EU, but voters said otherwise). This was 1) either the “media” didn’t want to report true polling numbers, 2) the media is flat-out out of touch with the rest of the country or 3) they need a refresher in statistics. Whatever the reason, it will cause us to forever look at the media with a big fat grain of salt – especially when it comes to surveys and polls.

So What Should An Investor Do Now?

One of the most important things you can do, however, is to talk to your financial advisor, especially as we approach the end of the year.

Now more than ever, it’s important to make investment decisions based on your goals and
your tolerance for risk. Not based on who sits in the Oval Office.

END_OF_DOCUMENT_TOKEN_TO_BE_REPLACED 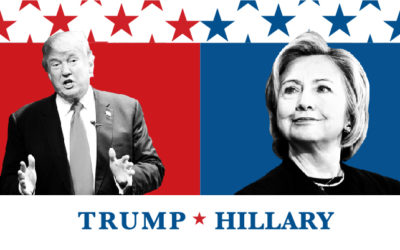